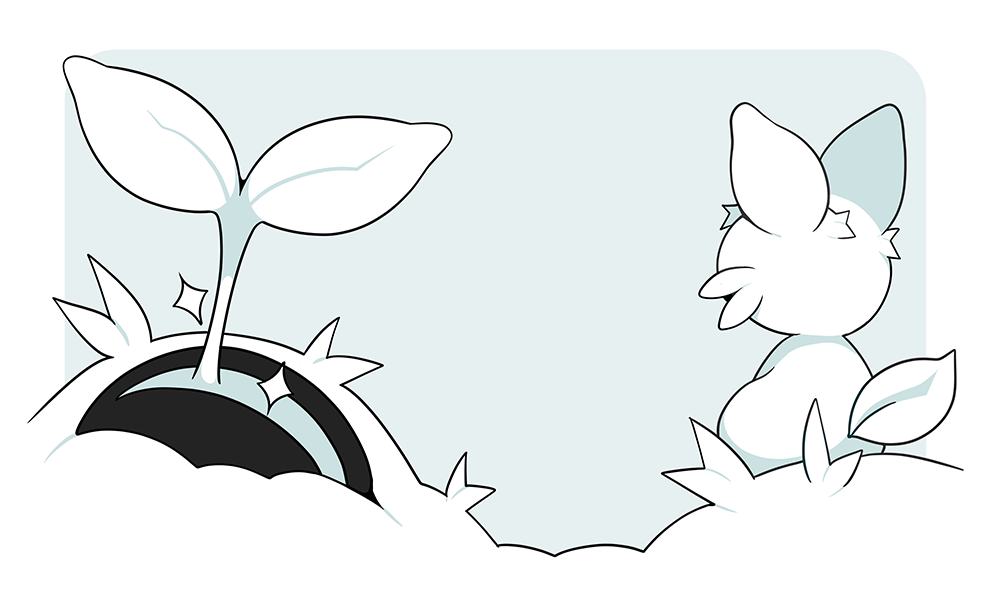 Arborlings are born when an excess of magic is introduced to a seed. Some arborlings may be intentionally "planted", but most of them occur naturally! The standard arborling is approximately 25% plant, but where the plant grows differs from each individual. Plant growth can occur from the head, tail, torso, etc! These itty bitty creatures live alongside strudels and specialize in farming, alchemy, and foraging. They often live alongside humans and assist gardeners, farmers, and witches. Arborlings help plants grow and protect them from all sorts of rot and diseases. Arborlings who choose not to live alongside human civilization may settle down in wilderling territories. They often act as scouts, foragers, and healers. They may also choose to abandon the notion of community entirely and travel via caravan in small groups of 3-4 arborlings.

The form we’ve come to know as the standard arborling is actually a result of the magical drought that came into effect after Midveil’s separation from Faerth. Without the steady flow of magic from Faerth, arborlings were forced to make due with an adolescent form. After centuries of drought, the original forms of arborlings had become all but forgotten. However, during the annual Great Migration of 2021, a once forgotten idol was discovered deep within the Slumbering Woods of Cafe Central. This towering wooden giant seems to be a relic of Faerth, and from its hands, magic trickles forth from a mixture of spring water and sweet sap. Drinking from the druid’s pool has been said to awaken the full potential of arborlings, and the form they take upon partaking in the sap has been dubbed “druidic arborlings.”

“Druidic arborlings” are significantly larger than their counterparts. Whereas their standard forms are among the tiniest residents of Midveil, druidic arborlings stand at equal height with strudels. They feature a secondary set of whiskers atop their brows, and elongated features. A druidic arborling’s plant growth flourishes upon enlightening, and may make up to 50% of their bodies. Regal manes are a common feature among druidic arborlings.

Druidic arborlings are still uncommon amongst arborlings, with the Druid’s Springs being heavily guarded by the wilderlings of the Slumbering Woods. To reach the springs, one must first form a party and tackle all of the dangers of the woods. This phenomena first began around the annual migratory periods of the arborlings, but it seems only the most magically adept have heard the call of the woods. The sap of the Druid’s Spring flows freely during the months of March and April, but seems to dry up significantly during off seasons. 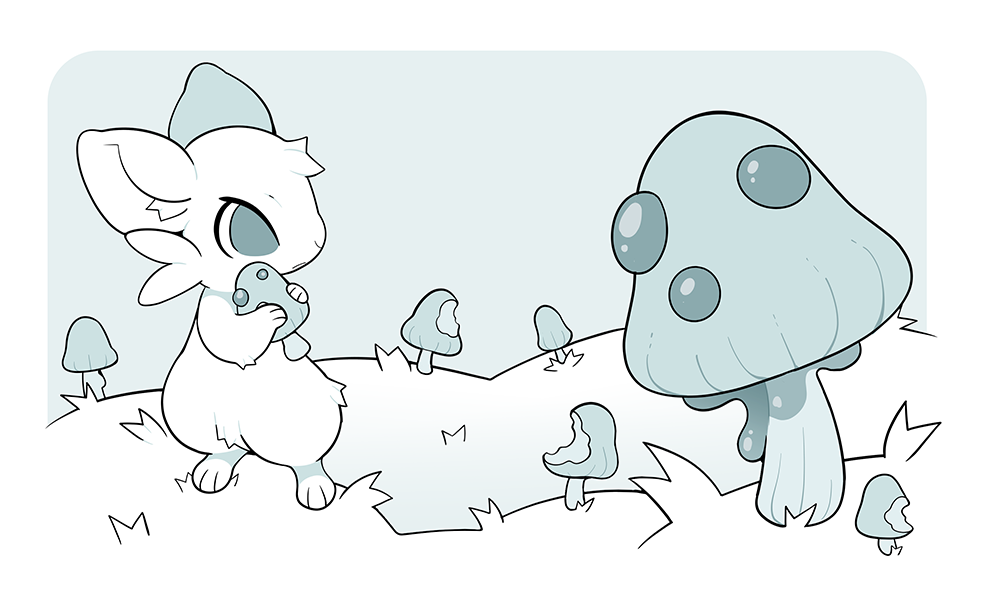 While the discovery of the Druid’s Springs is seen as a ray of hope in Midveil, there are still insidious powers at work. Within the Slumbering Woods, a mysterious mushroom is known to pop up randomly. It takes the form of a sickly blue agaric with a strange red sap seeping from its pores. While the mushroom itself is quite bitter, the red sap is known to be quite sweet, and can be quite irresistible to any creature that stumbles upon it. Any animal unfortunate enough to feast upon this mushroom will become infected by its spores. Quite similar to cordyceps, the spores infect its host and take up residence in the host’s brain. This mushroom has become known simply as the "Bad Shroom" and is the root cause of blight.

The blight presents differently depending upon the arborling’s sprout, however, it has been observed to progress in three phases. Phase One, or the initial infection, begins with the host showing extreme lethargy with an inability to sleep, leading individuals to develop deep rings around their eyes. The insomnia causes agitation in infected individuals, and may lead to angry outbursts and isolation. During this phase, infected individuals are not yet aware of their illness, and are not contagious to others.

Phase Two occurs when the spores have finally taken root within the host’s brain and the sprout. Once the spore has infected the brain, there is no hope for a cure. This phase is known as the “overgrowth” phase. During infection, the spores will cause accelerated growth in the sprout, often overtaking the host. Due to this sudden burst of growth, infected individuals cannot keep up with the nutrients needed to support the growth, and will begin wilting. Phase Two is highly contagious, and any infected individuals must be immediately evacuated from civilization. The blight can not only infect other arborlings, but also food supplies within villages.

The final phase of blight is known as the Wandering phase. At this point, the individual is no longer sentient, and is beyond saving. The blighted arborling will begin to wander back to its birthplace, stopping only when it reaches its destination, or expires from dehydration. It is unclear whether the Wandering stage is caused by the blight itself, in an attempt to infect the mother sprout, or if it the arborling’s last bit of consciousness attempting to find a shred of comfort in its final moments.

Every user is granted with one standard arborling seed upon joining! We encourage you to be as creative with your arborling as possible within the following guidelines. Refer to the following information for rarities, as well as traits that are found within each arborling. 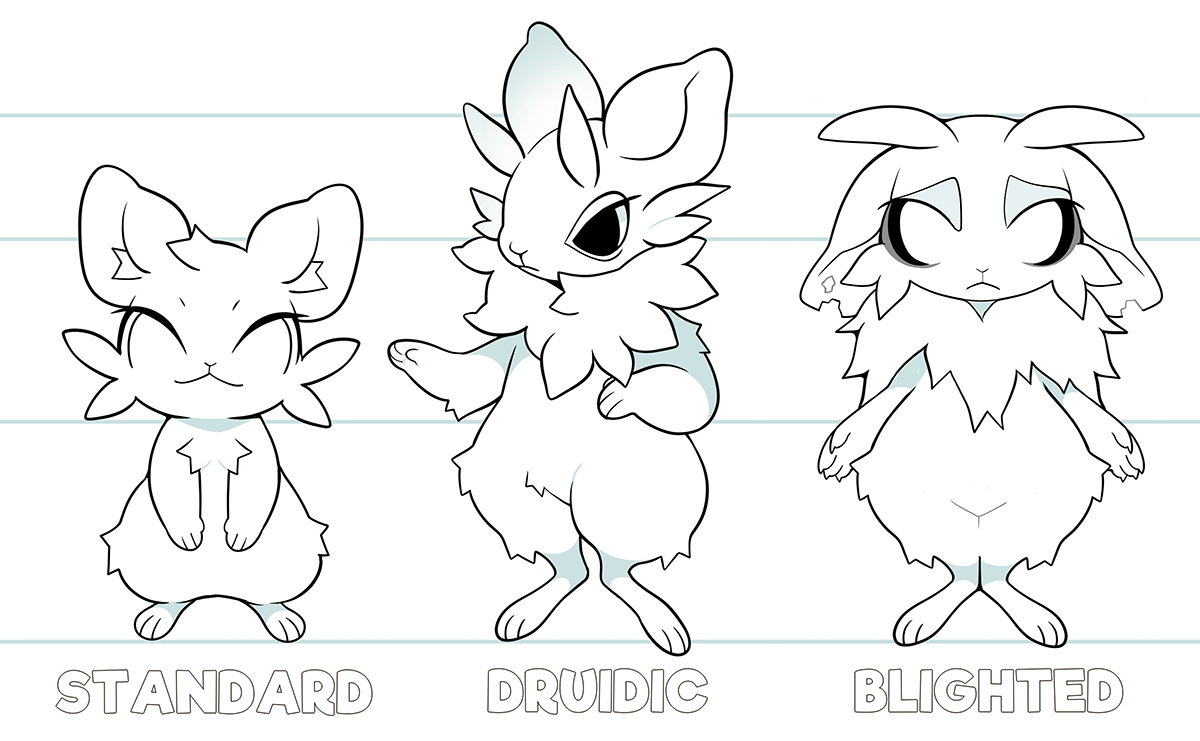 Standard arborlings are short, chubby and pear-shaped. Their muzzles are short and rounded (similar to a rodent), and they grow thick whiskers from their cheeks. They stand atop their hind legs, with short feet that tend to be "tucked" under their bodies. Arborlings are herbivorous with flat teeth for grinding up plant matter. They most commonly have short fur, with small tufts at the cheeks or joints. Angora is considered a rarity on arborlings, but can be achieved with mutation potions.

Druidic arborlings have more elongated features. They stand at the same height as Strudels, with longer legs and visible ankles. Most notable is the extra set of whiskers that grow from their brow. They usually present with flourshing plant growth in the form of a mane, or growing down their back. Druidic arborlings unlock the full potential of their magic and can use special mutations. To become a druidic arborling, an Ancient Sprout must be applied to the Arborling.

Blighted arborlings tend to be rather unkempt and scruffy. They have rough fur and their claws have overgrown. Their eyes become blank, or extremely dilated. They have three stages of blight which affect how decayed and overgrown the body becomes (referenced in the Blight introduction). A blighted arborling will have standard arborling anatomy unless it was druidic prior to being blighted. To become blighted, a Bad Shroom must be applied to the Arborling. 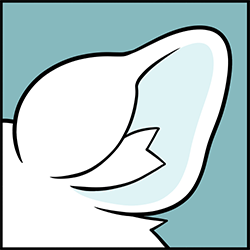 Arborlings have large triangular, bat-shaped ears. These ears are standard amongst arborlings, and do not vary in shape. However, they can vary in size or in perkiness. Their ears can droop, but rarely fold over. 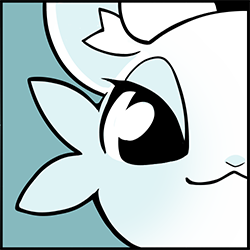 Every arborling has thick whiskers upon their cheeks. They are not thin like cat whiskers, and do not grow from the snout. Plant growth can present in the whiskers. Whiskers must be distinguishable from the rest of the design, and should not be hidden under hair or accessories in the masterlist image. 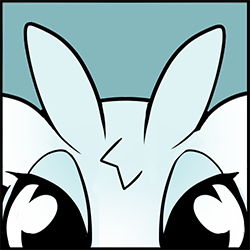 Druidic arborlings grow a second set of whiskers on their brow. This can also present as plant growth in some Arborlings. Whiskers must be distinguishable from the rest of the design, and should not be hidden under hair or accessories in the masterlist image. 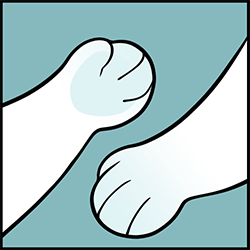 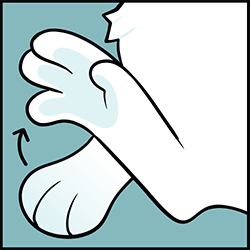 Arborlings have three rounded toes, with a small “thumb” tucked up under the foot. They are able to use their feet to grip and climb with ease. Standard and druidic arborlings do not grow claws on their feet. 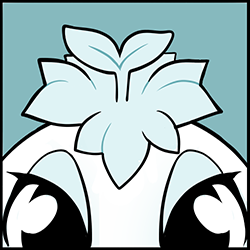 Arborlings commonly sprout from the tail or the top of the head. On some occasions, a sprout may develop from the eye or ear. Standard arborlings present about 25% plant growth. Druidic arborlings present with more flourishing plant growth, commonly formed in the shape of a mane, or growing down their back. In blighted individuals, the plant growth will overtake the body in a symptom known as “overgrowth.” 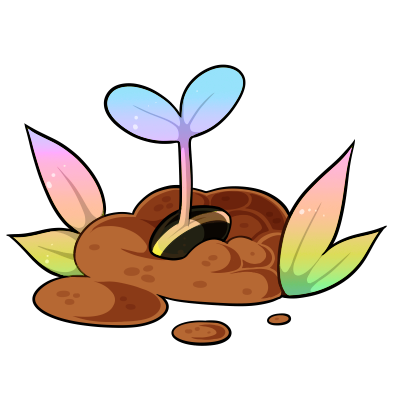 Rarity is based on the type of plant growth exhibited by the Arborling:

Some genus of plants can have species that fall under different rarities, so it's important that you specify the species of the plant you are using! For example, Ipomoea, or "Morning Glory" contains both water spinach (Ipomoea aquatica) which is silver rarity, and sweet potato (Ipomoea batatas), which is common rarity.

Multiple arborlings can be based on the same plant, but they must be unique and easily distinguishable from each other. Whether you use a different color scheme, markings, or a different area for plant growth. Designs that are replicas of others will not be approved. The mods reserve to right to deny designs they feel are too similar to a pre-existing arborling.

If you are unsure of anything, please don't hesitate to DM our Arborling mod using the Mod Directory!

When an Arborling reaches druidic form, their body can take on certain mutations. These mutations are available through special items that can be applied to your druidic arborling. 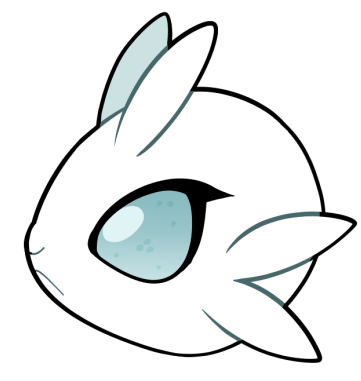 Insect-like eyes comprised of hundreds of optic organs! This mutation comes from the Peep Berry. 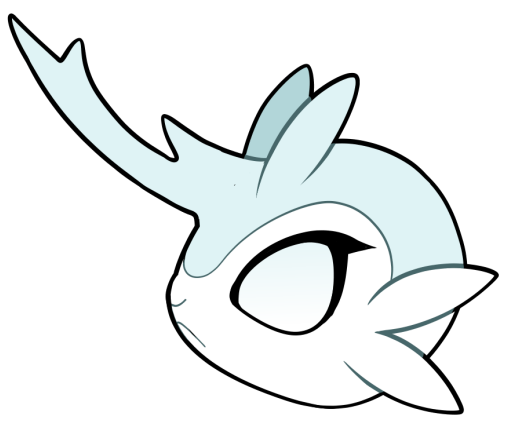 Horns that mimic beetles of the forest. These horns are placed atop the head. The horn can resemble that of any naturally occurring beetle. This mutation comes from the Greater Horned Melon. 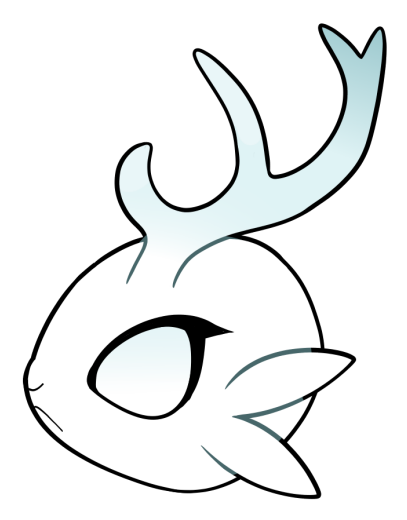 Ornate antlers that replace the brow whisker of a druidic arborling. These antlers have at least three tines and are made up of hard keratin. This mutation comes from the Candied Root. 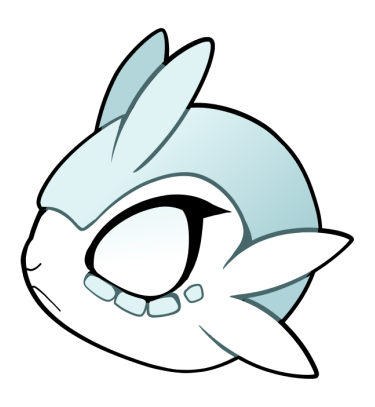 A hard, exterior shell that covers the body of an arborling. This can also occur in small sections that mimic scales. This mutation comes from the Shell Sprout. 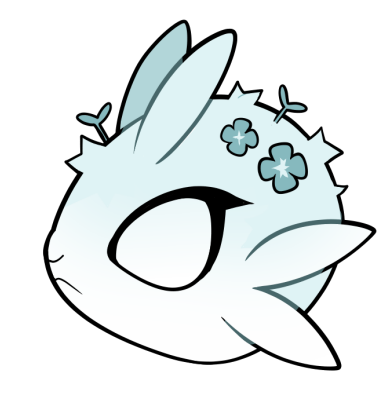 Small symbiotic plants that grow upon the body. These plants are complementary to the arborling's sprout. For example, wildflowers growing on a grass arborling. This mutation comes from Sweet Sap. 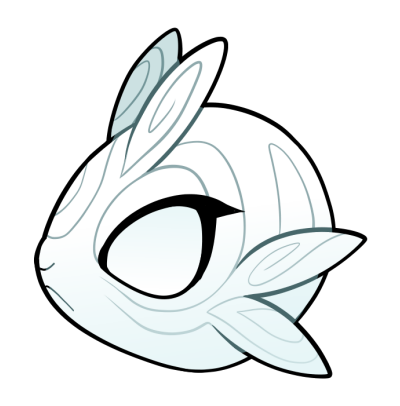 Plant growth that makes up the entirety of the arborling's body. Often seen as wooden bodies, moss fur, etc. This mutation comes from Lush Moss. 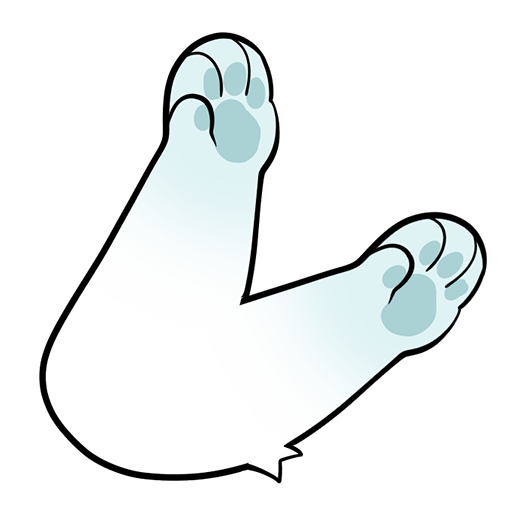 A second set of arms that sprouts directly underneath the naturally occurring limbs. This mutation comes from the Rainbow Clover. 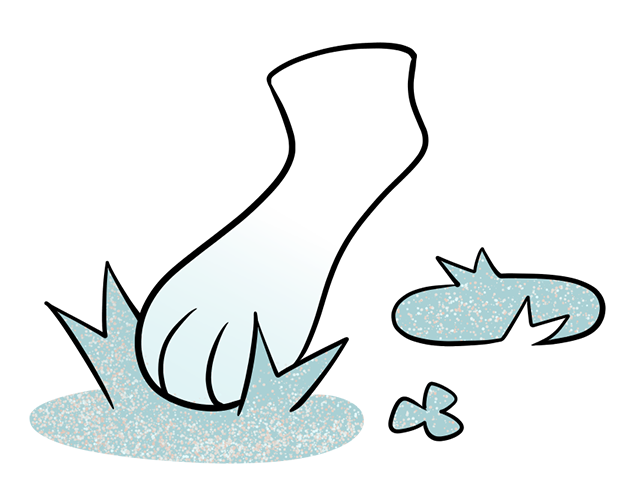 A trail of lush sprouts follows the druid wherever they step. In blighted arborlings, the opposite effect occurs, and the plant growth beneath their feet will die. This mutation comes from Prism Grass. 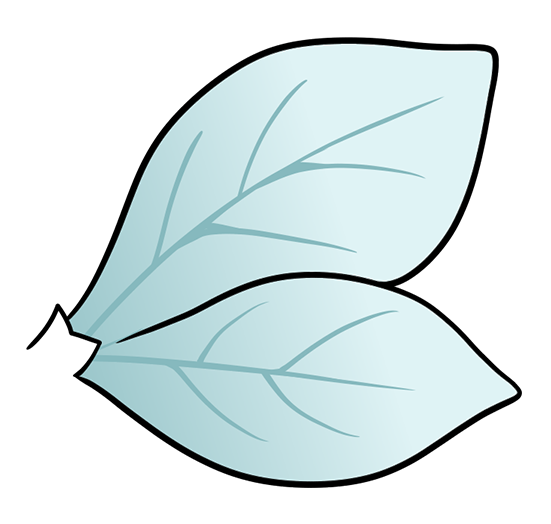 Usable wings made up of leaves, petals, etc. This mutation comes from drinking Sacred Nectar. 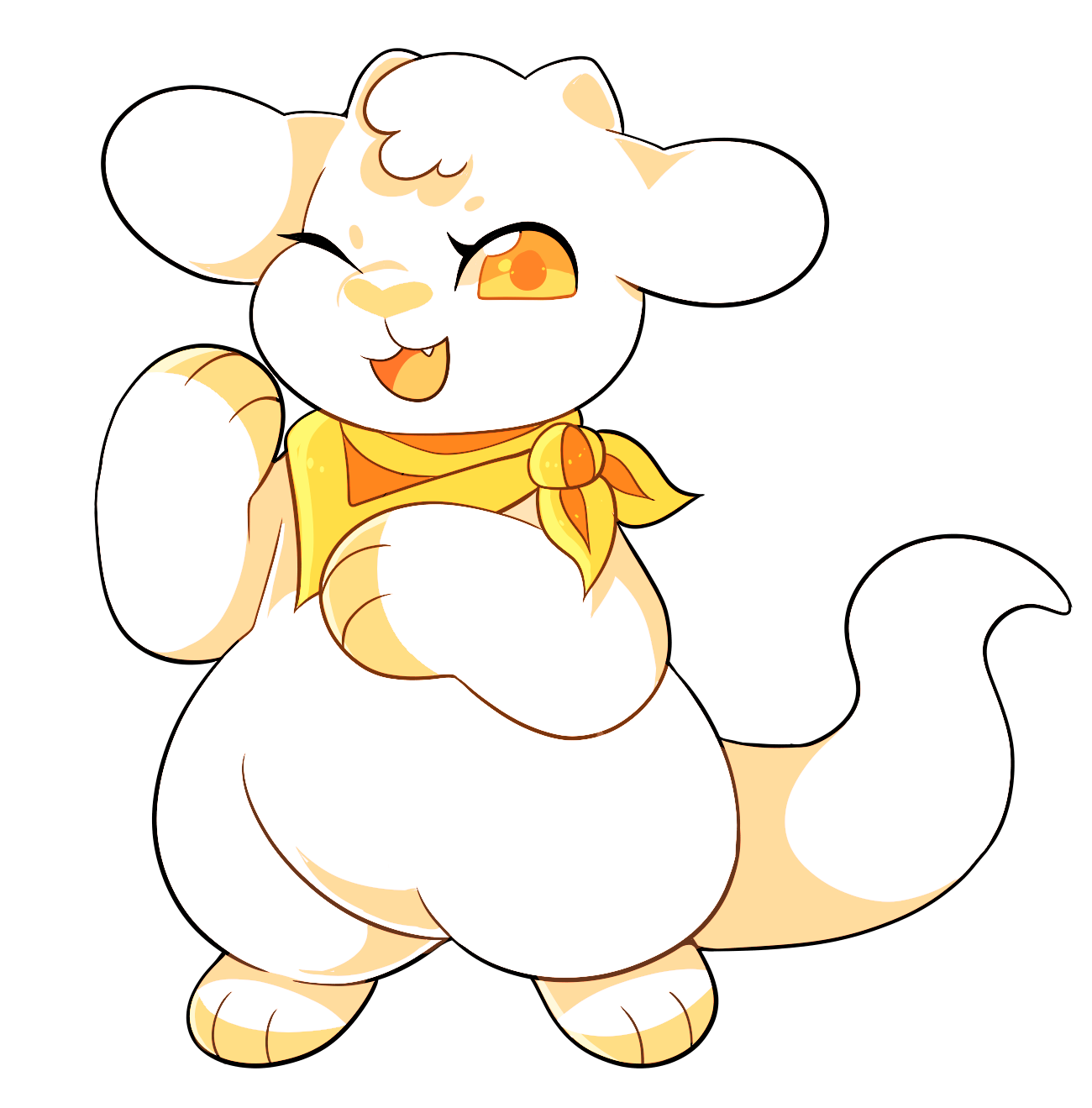